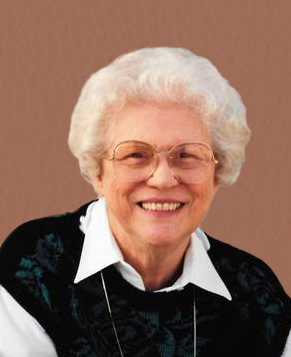 Inez Leona (Long) Camburn, dearly beloved child of God, received the upward call of God in Christ Jesus on March 16, 2020, at the age of 102. Jesus reached down, took her hand, and said, "It's time to come home."

Born during World War I, Inez grew up in Kalamazoo, the last of eight children. She attended Kalamazoo High School and Parsons Business College, then worked for a doctor for several years, which is where she met her husband, Vern. Though they had dated for years, theirs was a whirlwind wedding: Vern was serving in the Navy while World War II was escalating. They were married when Vern had a 13 day furlough. During the war, she and a number of friends formed a sewing club in order to create items for the soldiers. Even after the war, this club continued for the rest of the members' lives due to the strong friendships they had built.

Throughout her life, Inez kept very busy. For many years she worked as the head cashier at Grant's General Store in Galesburg, Michigan, in order to pay for the college education of her three children. Inez also served the Lord for many decades as a member of Bethel Baptist Church in Kalamazoo. She was the teacher of a teen girls' Sunday school class, a deaconess, and served on the missions committee. After retirement, she devoted much of her time and energy to the Loaves and Fishes ministry providing food to the needy. She made many lifelong friends at Bethel, friends of every age.

Several years after their marriage, Inez and Vern moved into her parents' Galesburg home where they lived until downsizing to a Kalamazoo apartment after retirement. A few years after Vern's death Inez moved to Grand Rapids in order to be close to her daughter, Margaret. No matter where she lived, Inez made close connections with neighbors -- even singing in a Glee Club in her Grand Rapids years and finding friends as interested in a serious game of Rummikub as she was! She made her home in Rockford with her other daughter, Jan, from 2011 until the Lord took her home.

Inez was a survivor. She lived through the Great Depression and both World Wars. She nursed her mother and later her husband through their final days. She survived family heartaches, a car accident, multiple surgeries, even a broken hip at an age when recovery from this can be doubtful! She lived to see the world change from horse-drawn carriages to the electric car, from telegrams to cell phones. She even survived the addition of technology, which often drove her crazy!

But beyond just surviving, Inez found ways to thrive and to enable others to thrive as well. Her sense of humor lasted until her last days on this earth, and she made friends easily wherever she went. She was a good cook, a good neighbor, a loyal friend to many of all ages. She kept track of both family and friends, and was the self-appointed family historian for both the Long and the Camburn families. She wrote countless letters and relished receiving them. She loved to travel with family both locally and abroad, visiting many parts of the United States as well as Mexico, the British Isles, and Europe. She loved holidays, especially Christmas.

She was preceded in death by Vern, her husband of 47 years. She is survived by her children: Margaret Kinloch, Jan Camburn, and Brian (Diana) Camburn; by her grandchildren: Joy, Thomas (Jenny), Ruth (Jason); and by one great-grandchild: Ian.

She fought the good fight. She finished the race. She kept the faith. Now she sees Jesus face to face.

To send flowers to the family or plant a tree in memory of Inez Leona (Long) Camburn, please visit our floral store.