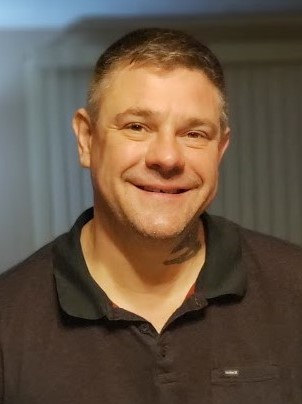 David Lee Taylor, age 44, lost his courageous battle with cancer on the afternoon of Monday, February 10, 2020. He was born on August 25, 1975, in Evanston, IL the son of Bruce and Julia (Stevens) Taylor.

David grew up in Schaumburg, IL playing soccer and basketball, riding his bike, and skateboarding. In fact, he was so active and fearless the nurses at the ER knew he and his mother by their first names from all of the stitches and sprains he was always getting. He spent a great deal of time fixing family cars and restoring classic cars in the garage with his father. By the time he could drive he could fix nearly anything that a car could need. In 1991, his family moved to Paw Paw, MI, where David attended Faith Baptist Academy and met Danna Holloway. Dave moved to Oklahoma City, to live independently, the summer of 1992 just before he turned 17. In Oklahoma, Dave met Amber Sweet, who he married on April 14th, 1995. Five days after their wedding, David was in the area when the Oklahoma bombing took place. He held the hand of a female child, who was buried under the rubble until her parents could arrive. David and Amber's son, Jacob Taylor, was born several months later, on October 6th, 1995.

Dave and Amber eventually decided to divorce, and in 2002, David moved back to Michigan, where he reconnected with Danna Holloway. They were quickly inseparable and lived together for 4 years before getting married on May 9, 2007. Dave had become like a father to her son, Austin Fee, who lost his biological father that same year. David and his family lived in Mattawan, Michigan, where they found many friends and like-minded people in their community. David pursued many interests in his lifetime. He was very mechanically inclined and quickly took to the heating and air industry. He enjoyed restoring old cars, riding his Harley, kayaking, shooting pool and cultivating cannabis.

Dave is remembered by friends and family as a badass. He was tough, smart, witty, hot-tempered, confident, and fiercely loyal. Dave was preceded in death by his parents. He is survived by his wife, Danna; his sons Jacob Taylor and Austin Fee; two sisters, Linda Taylor and Christina Taylor; two nephews, Devin Saxton and Isaiah Taylor; and many, many friends.