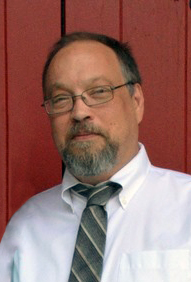 Kenneth George McMullen, 51 was born in Warren Michigan to Rasma and Gerald McMullen on October 26th, 1968. He died peacefully in his home on January 8th, 2020 after a brief illness.

Ken attended Paw Paw High School and graduated in 1987, In December, 1989 he became a father to his beloved daughter, Lindsay.

Ken had a big personality and he was well known among his friends and family for his dark sense of humor. His heart was bigger than his personality, and once you knew Ken, he would give you the shirt off his back if you needed it. Ken valued his family, and prioritized them over everything else in his life. He was an incredibly hard worker, and had a hard time being idle. He was frequently seen behind the scenes at Trinity Lutheran Church, running the fellowship coffee service.
Ken loved movies, books, music and theater (especially musicals).

He will be greatly missed by all that knew him.

He was preceded by his death by his father, Gerald McMullen.

He is survived by his wife Yvonne, his mother Rasma, daughter Lindsay, his brothers Kevin(Vicki) and Brian (Rosemary), and numerous others.