"To care for him who shall have borne the battle and for his widow, and his orphan."

The Mission of Fort Custer

The National Cemetery Administration honors Veterans with final resting places in national shrines
and with lasting tributes that commemorate their service to our nation.

BIVOUAC OF THE DEAD, A TRIBUTE TO VETERANS, BY THEODORE O'HARA 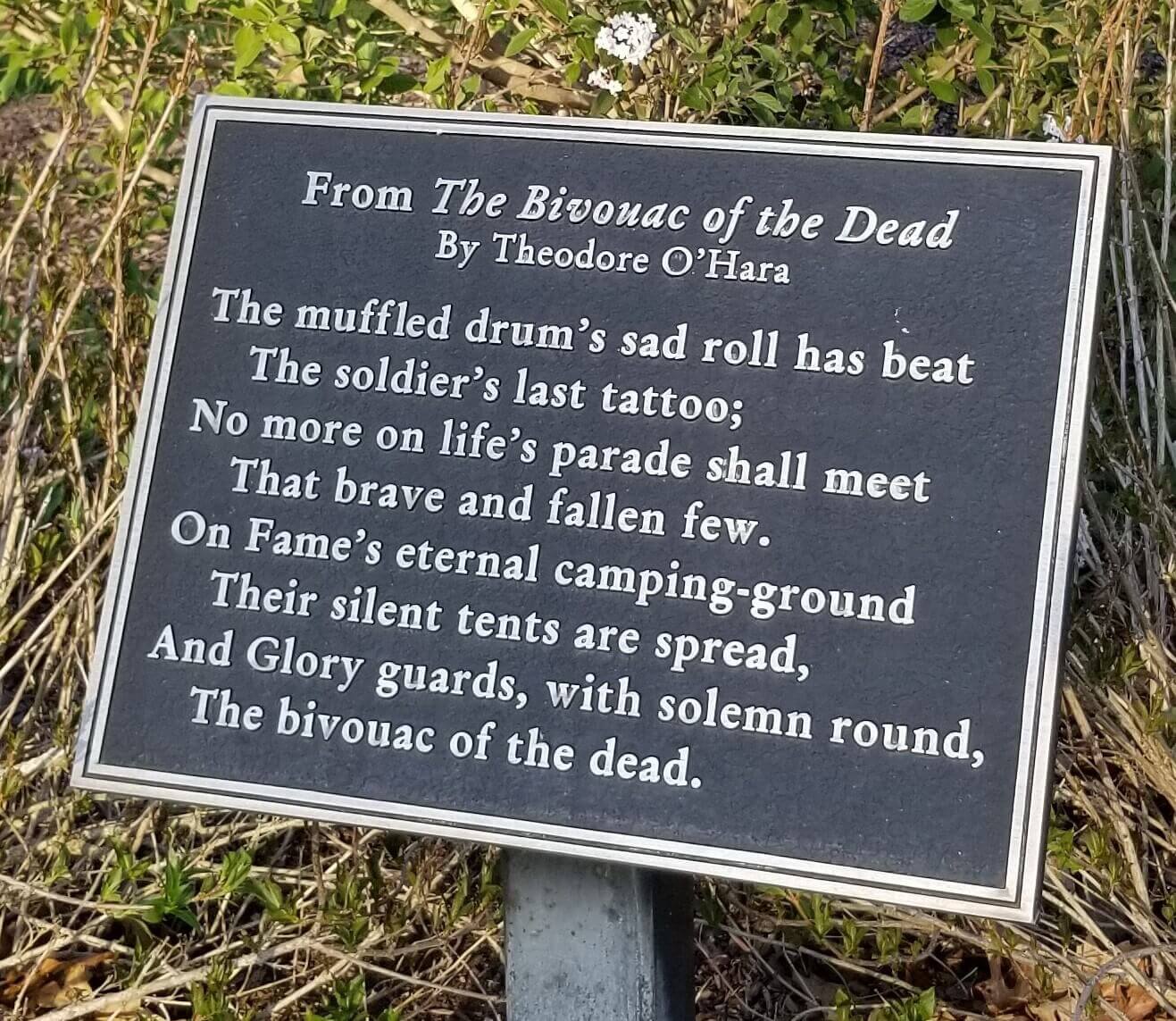 (A portion of this verse is on a plaque next to the grave locator building inside Fort Custer. The full verse is found below.

"BIVOUAC OF THE DEAD"

The muffled drum's sad roll has beat
The soldier's last tattoo;
No more on life's parade shall meet
That brave and fallen few.
On Fame's eternal camping-ground
Their silent tents are spread,
And Glory guards, with solemn round,
The bivouac of the dead.

No rumor of the foe's advance
Now swells upon the wind;
Nor troubled thought at midnight haunts
Of loved ones left behind;
No vision of the morrow's strife
The warrior's dream alarms;
No braying horn nor screaming fife
At dawn shall call to arms.

Their shriveled swords are red with rust,
Their plumed heads are bowed,
Their haughty banner, trailed in dust,
Is now their martial shroud.
And plenteous funeral tears have washed
The red stains from each brow,
And the proud forms, by battle gashed
Are free from anguish now.

The neighing troop, the flashing blade,
The bugle's stirring blast,
The charge, the dreadful cannonade,
The din and shout, are past;
Nor war's wild note nor glory's peal
Shall thrill with fierce delight
Those breasts that nevermore may feel
The rapture of the fight.

Like the fierce northern hurricane
That sweeps the great plateau,
Flushed with the triumph yet to gain,
Came down the serried foe,
Who heard the thunder of the fray
Break o'er the field beneath,
Knew well the watchword of that day
Was "Victory or death!"

Long had the doubtful conflict raged
O'er all that stricken plain,
For never fiercer fight had waged
The vengeful blood of Spain;
And still the storm of battle blew,
Still swelled the gory tide;
Not long, our stout old chieftain knew,
Such odds his strength could bide.

Twas in that hour his stern command
Called to a martyr's grave
The flower of his beloved land,
The nation's flag to save.
By rivers of their father's gore
His first-born laurels grew,
And well he deemed the sons would pour
Their lives for glory too.

For many a mother's breath has swept
O'er Angostura's plain --
And long the pitying sky has wept
Above its moldered slain.
The raven's scream, or eagle's flight,
Or shepherd's pensive lay,
Alone awakes each sullen height
That frowned o'er that dread fray.

Sons of the Dark and Bloody Ground
Ye must not slumber there,
Where stranger steps and tongues resound
Along the heedless air.
Your own proud land's heroic soil
Shall be your fitter grave;
She claims from war his richest spoil --
The ashes of her brave.

Thus 'neath their parent turf they rest,
Far from the gory field,
Borne to a Spartan mother's breast
On many a bloody shield;
The sunshine of their native sky
Smiles sadly on them here,
And kindred eyes and hearts watch by
The heroes sepulcher.

Rest on embalmed and sainted dead!
Dear as the blood ye gave;
No impious footstep shall here tread
The herbage of your grave;
Nor shall your glory be forgot
While fame her records keeps,
Or Honor points the hallowed spot
Where Valor proudly sleeps.

Yon marble minstrel's voiceless stone
In deathless song shall tell,
When many a vanquished ago has flown,
The story how ye fell;
Nor wreck, nor change, nor winter's blight,
Nor Time's remorseless doom,
Shall dim one ray of glory's light
That gilds your deathless tomb.

Please enjoy these images and descriptions at your leisure. It is our pleasure to provide you with a sampling of Fort Custer history, as well as highlight the beautiful setting of the National Cemetery in our own 'back yard'. Please see our website for further information on complementary Langeland veteran tours.    /lgq/programs-seminars-and-events

After entering Fort Custer National Cemetery on Battle Creek Boulevard you are welcomed by the Avenue of Flags. 152 flags line each side of the road, one of the largest displays of its kind in the United States. A congressional exception was granted in order to never lower or remove any of the flags, however, constant exposure to Michigan weather requires vigilant care. Each Tuesday the flags are reviewed and those too tattered for display will be replaced.

At the end of the Avenue of Flags stands a single flagpole, taller than all the others. Here flies the largest of the flags at Fort Custer. Every morning it is brought down to half mast in honor of the fallen to be laid to rest that day. Only after all the services of the day are completed, will she be raised again. A process that is repeated every day. (labeled on the map as flag pole)

At the base of the large flag pole is a stone wall holding seals of each branch of the United States Armed Forces. Army, Navy, Marines, Air Force, and Coast Guard are all exhibited, surrounded by 56 flagpoles for each state and territory. These poles remain empty except for special days of remembrance such as Memorial Day and Veteran's Day. (labeled on the map as flag pole)

Near the end of Battle Creek Boulevard you will fine the administration building. It is open Monday through Friday from 8:00 am to 4:30 pm, closed on designated holidays.

In section B of Fort Custer is the German POW burial site.  Part of the Old Post, these soldiers were captives during WWII and put into service to help local farmers. Volkstrauertag (German for "people's day of mourning") is observed every year by members of the German Consulate.  It is a commemoration day two Sundays before the first day of Advent remembering those members of the armed forces of all nations and civilians who died in armed conflicts. This day was first observed in its modern form in 1952. 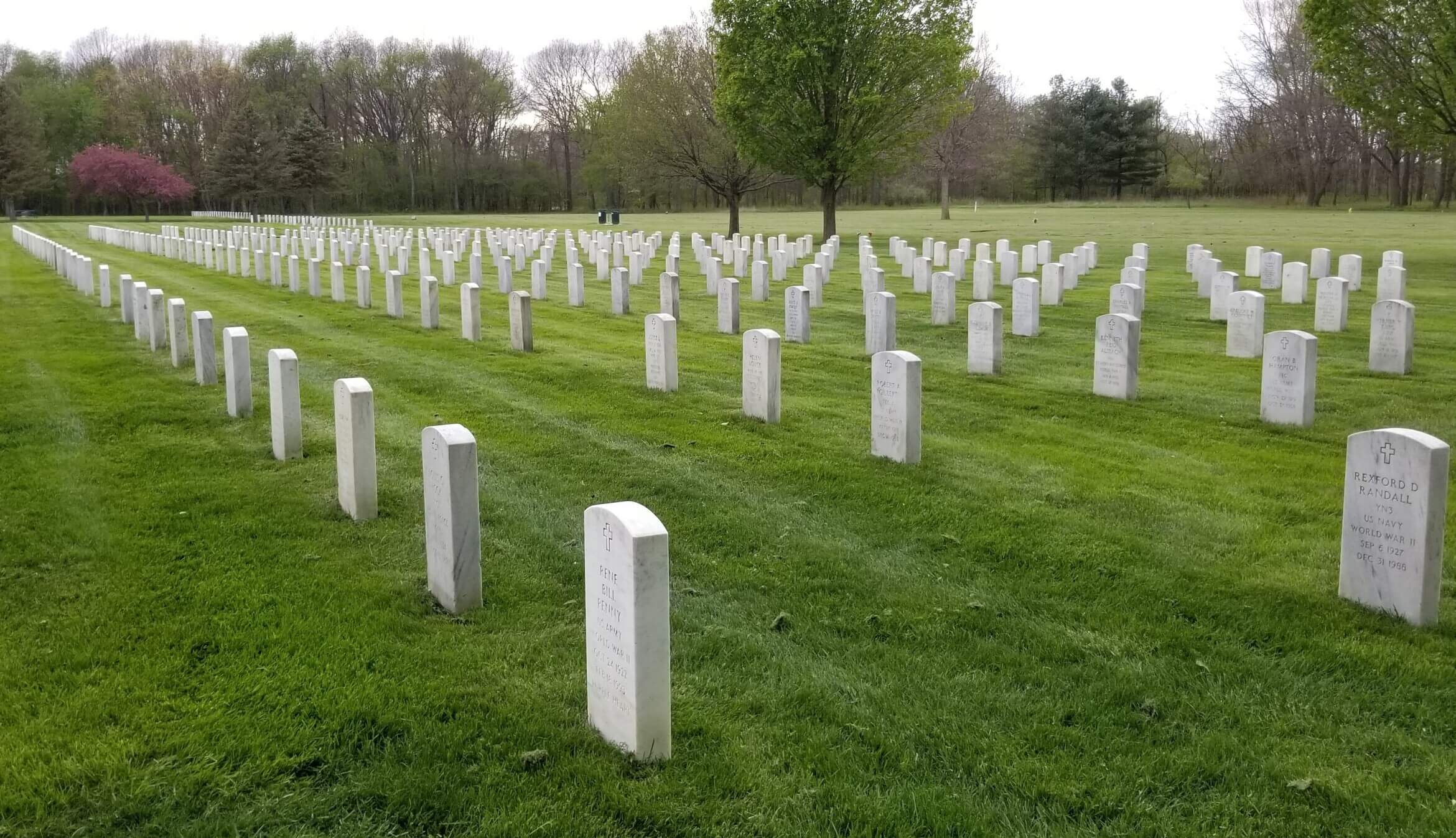 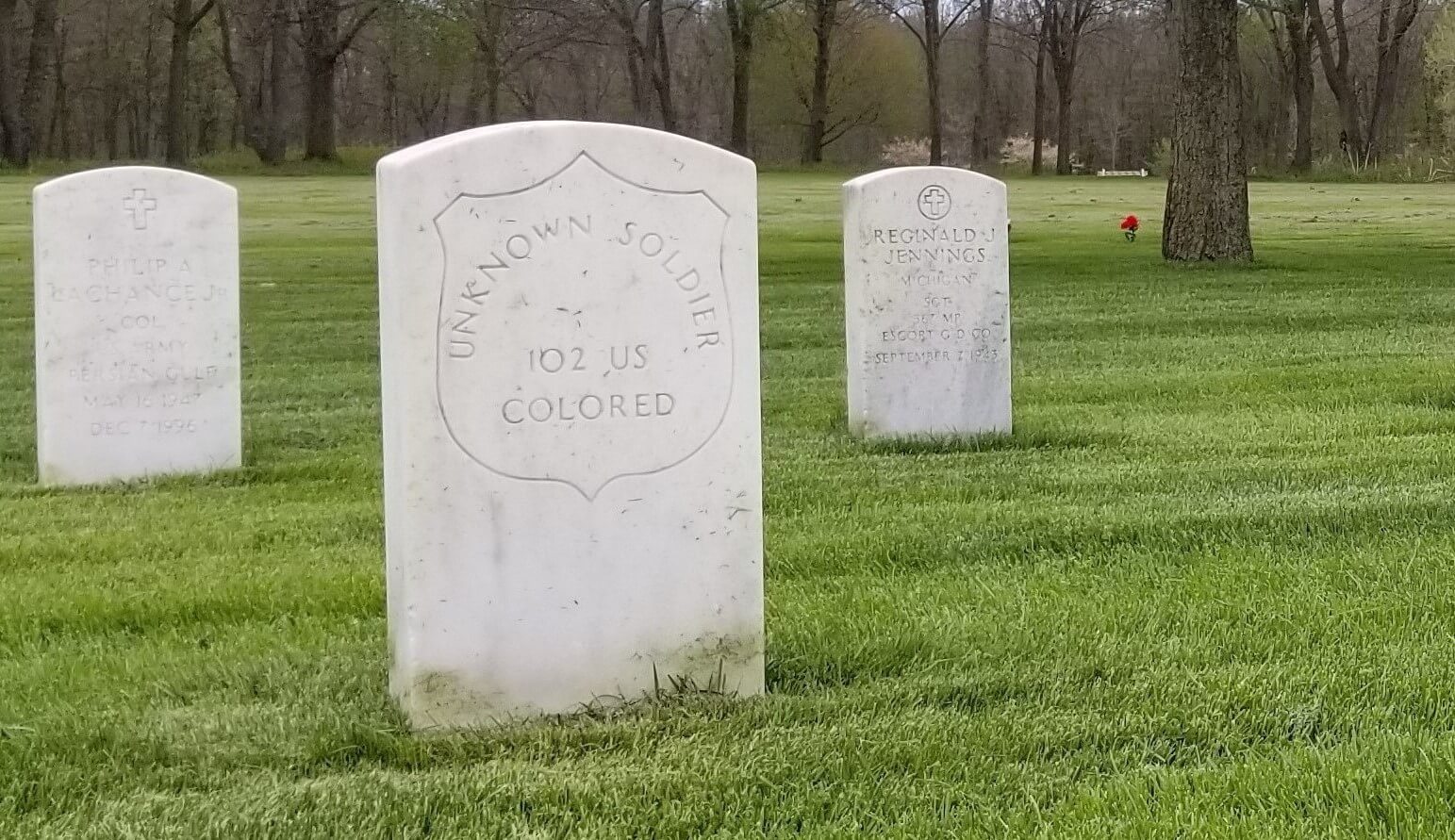 Next to the German section, in section A of the Old Post, you will find the burial sites of the enlisted men.  Among them is the only unknown to be found in the cemetery.  This soldier was found in a dilapidated grave site near Grand Rapids and brought to Fort Custer via caisson in 1987. The only information we have about him is found on his grave marker.

Near the Old Post area of the Cemetery, in section M, you will find markers with no remains present.  This can happen for several reasons (see photo at left).

Many people don't know that our veterans who's cremated remains have been scattered can have a stone at the National Cemetery.

Continuing west on Chippewa Way, you will come to the collumbarium, an above ground entombment for cremated remains.  Many families like the upright structure where they can find the name of their loved one easily. Nearby benches are convenient for quiet contemplation.

Continuing along Chippewa Way, you will come to this committal shelter.  No longer used for services, it is a peaceful place for thoughtful reflection.

Located off Fort Custer Drive, the Meditation gazebo can be found at the back of section 7 at the end of a beautifully wooded path.  A short easy walk is all it takes to enjoy the tranquil scene overlooking a pond.  Don't forget to keep your eye on the sky, as you may get a glimpse of one or both of the American Bald Eagles that nest somewhere in the nearly 800 acre cemetery. 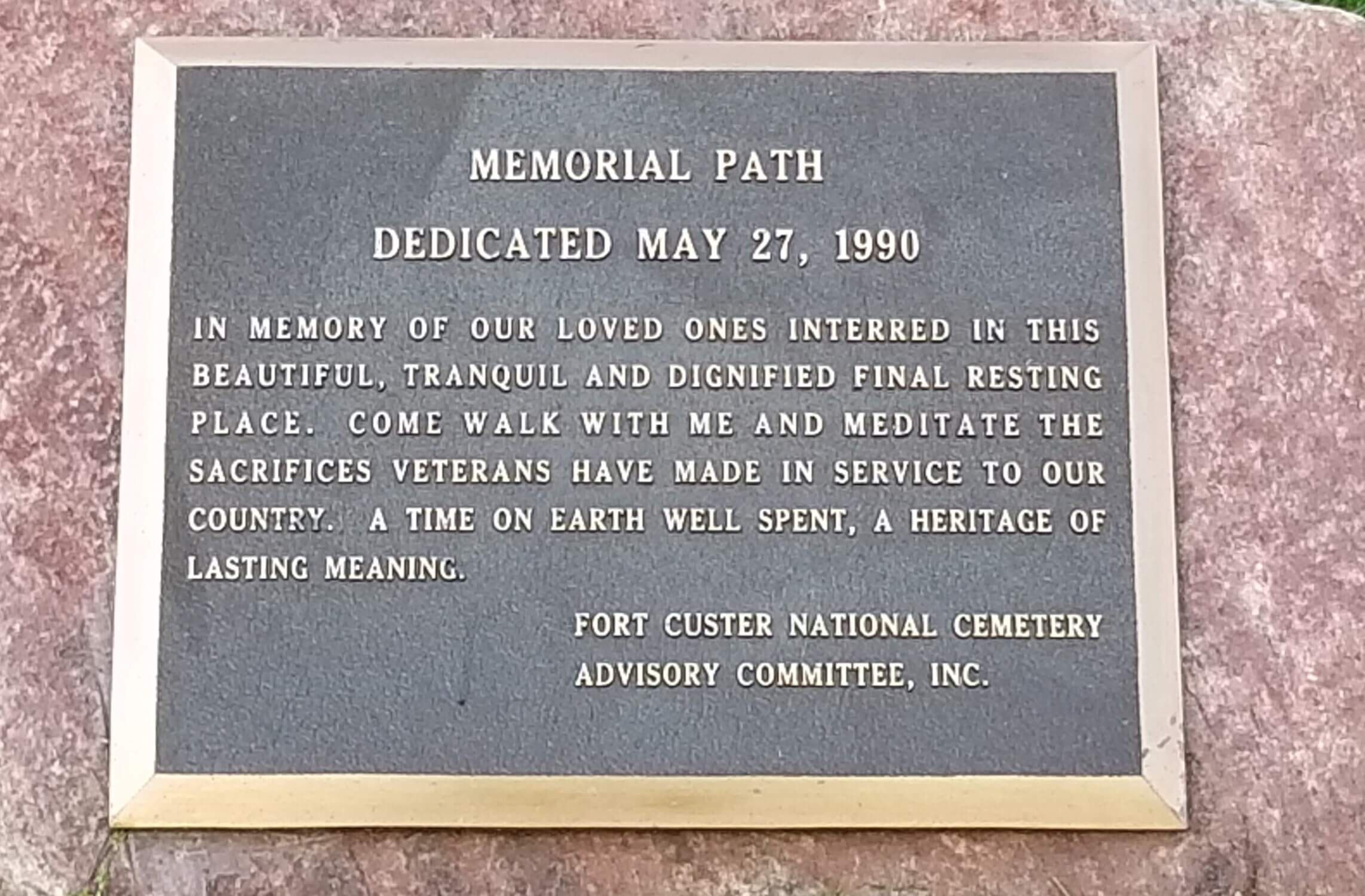 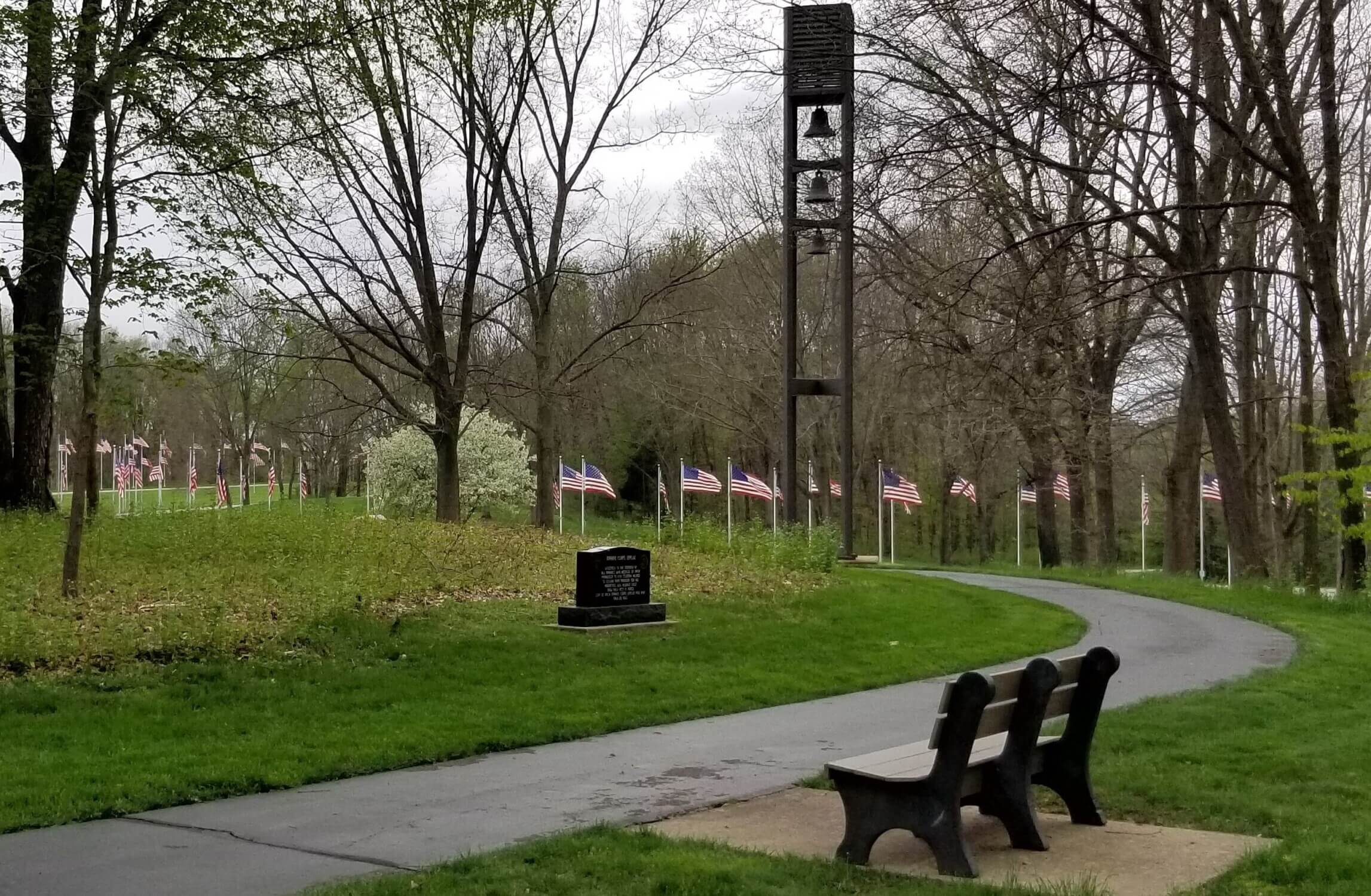 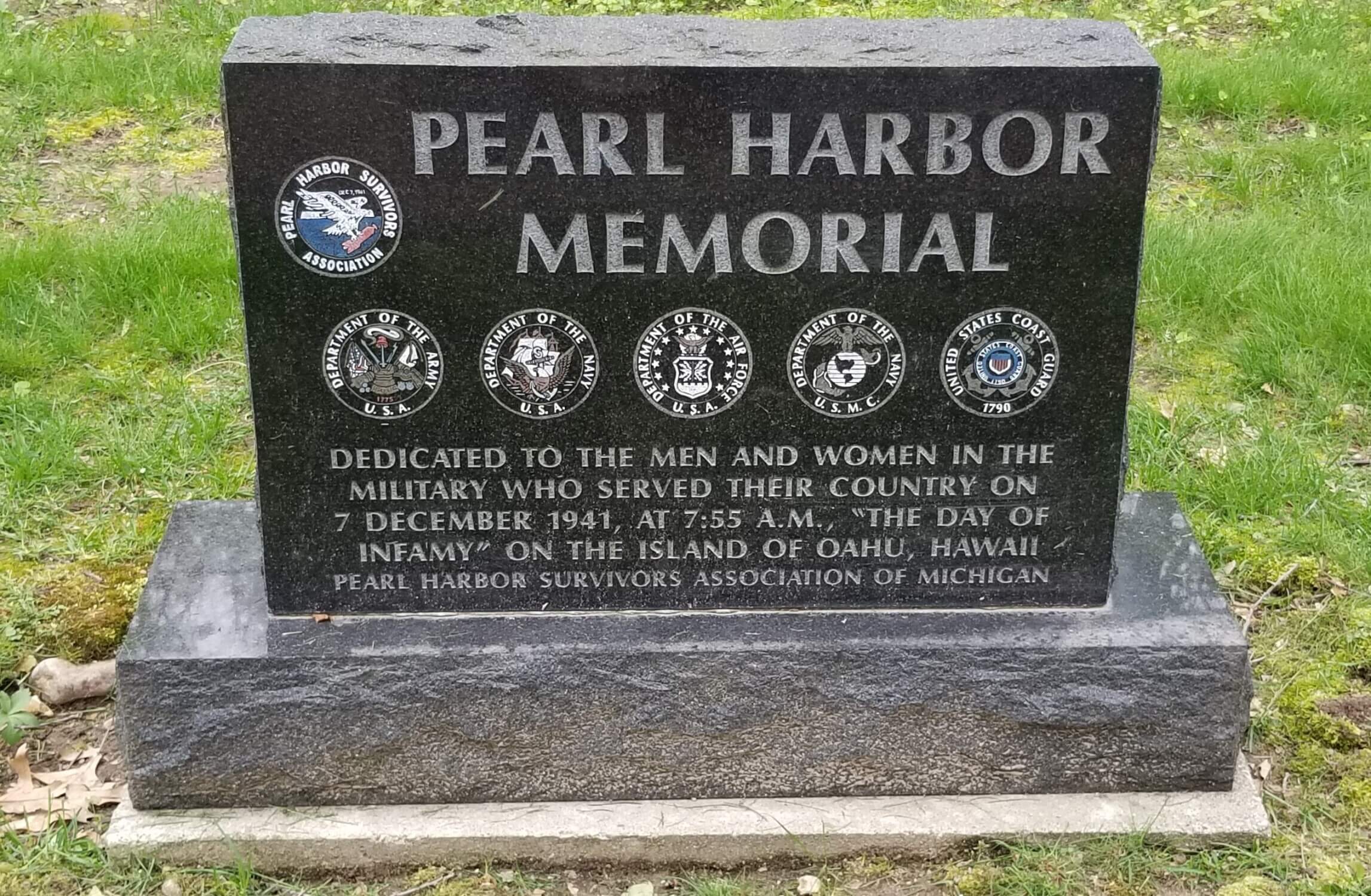 Winding your way back to the entrance on James B. Eads Road, then turning back on to Fort Custer Drive, across from section 10 you'll find yourself at the Memorial Pathway. This slightly hilly walkway has over 50 commemorative markers in remembrance of the men and women who have fought and continue to fight for our country.  The path is slightly difficult for challenged walkers but is wheelchair accessible. It is the perfect place to sit on a bench and hear the carillon bells mark the end of a service. 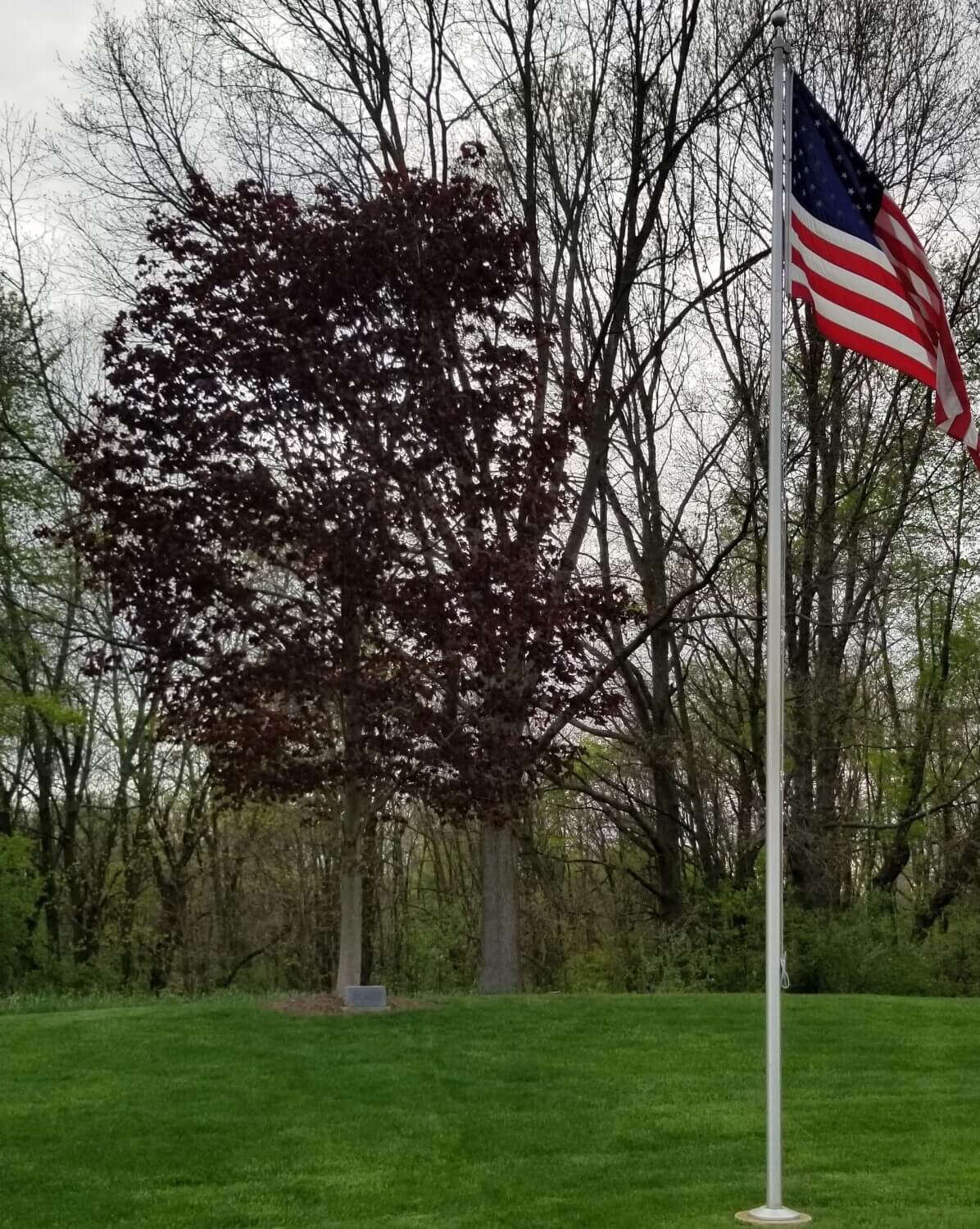 The last stop on our virtual tour is along the Avenue of Flags just as you're about the leave the cemetery.  There is a small stone placed at the base of a young Red Maple tree.  It is so small it's easy to miss unless it's pointed out to you.  Its diminutive size is misleading because the message it bears is felt throughout the country. 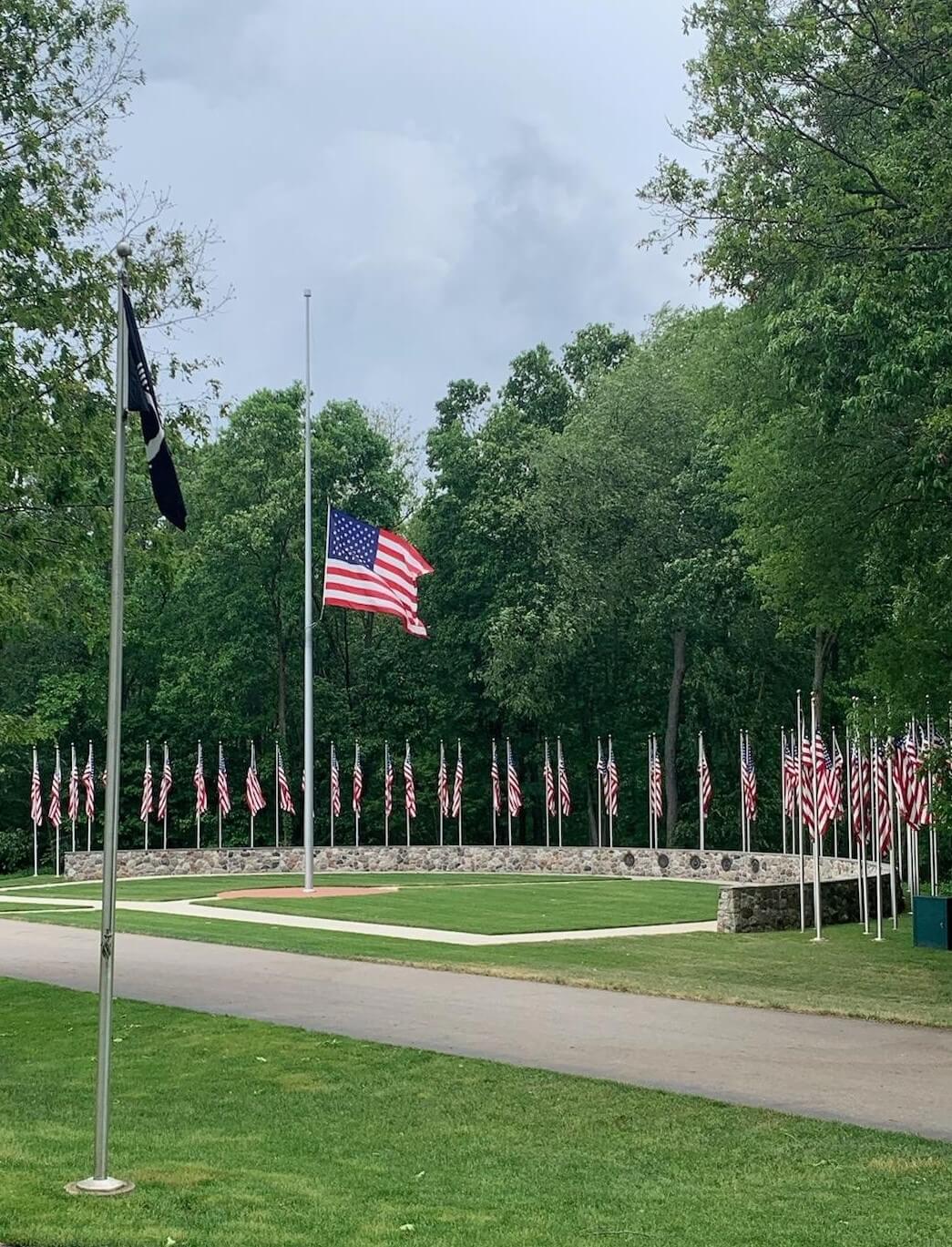 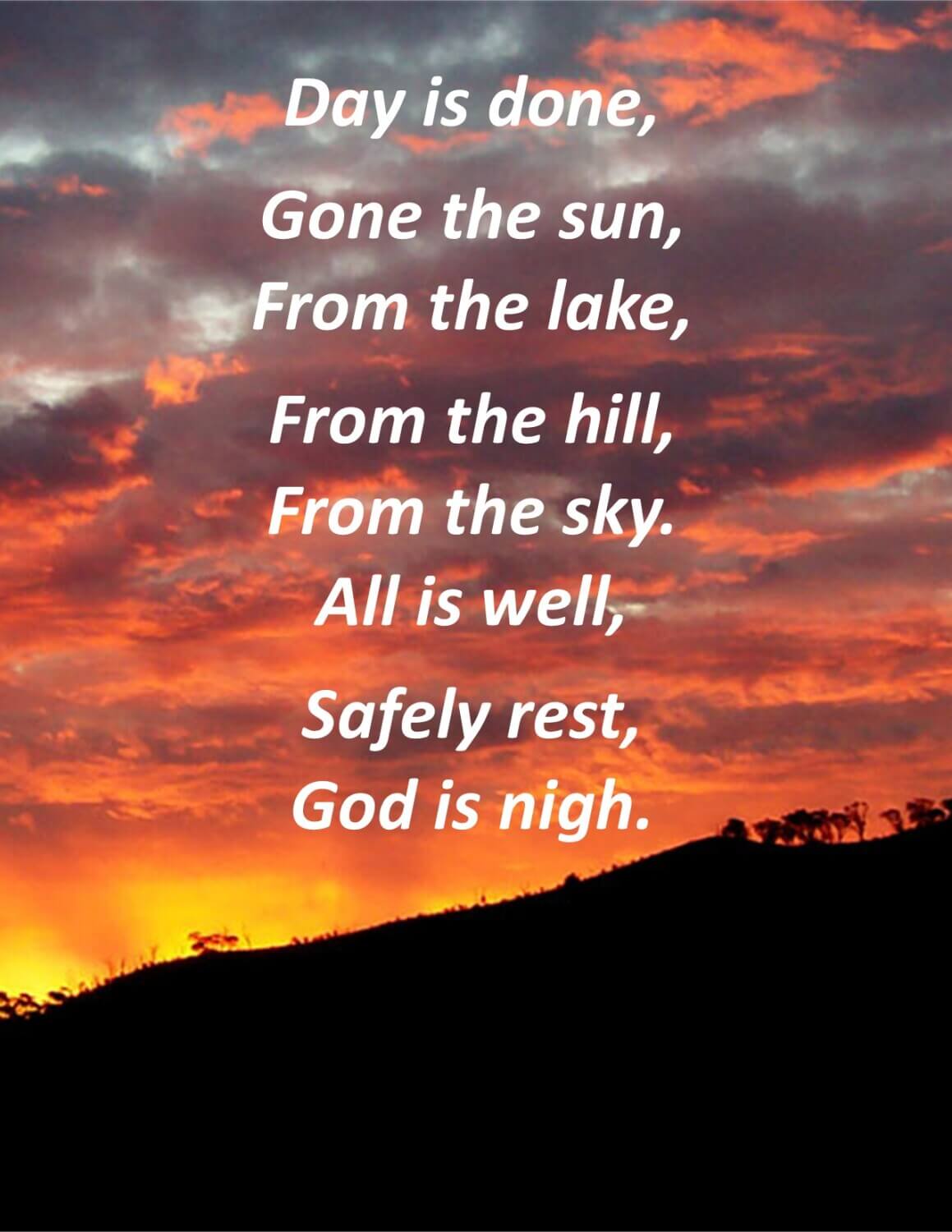 Thank you for joining us on our virtual tour of Fort Custer.